What better way to show the affection in your home than with a remodeled kitchen?

As a reflection of you, your home interior should be both practical and aesthetically pleasing.

How does your bath make you feel? Ready for the day? Graceful? Strong? Healthy? Relaxed? It Can!

Exterior design of your home is a compilation of elements that combine to create a visually appealing product.

A "Bathroom from Hell" gets transformed into a Heavenly Oasis

We call this project “Third Time’s a Charm” because this was Robert and Julie’s (our client) third attempt remodeling their master bathroom. Gasp! I know, we couldn’t believe it either! The first time they hired a contractor to renovate their bathroom, and ended up with shower leaks. They then had someone fix/redo the shower, and to their dismay, it leaked again. The extent of the water damage was so bad that they had to complete gut the bathroom. Finally, after two failed attempts at getting a beautiful, structurally sound master bath, Robert and Julie called US!

We could only imagine how frustrated and overwhelmed Robert & Julie must have felt dealing with this “Bathroom from Hell” as they called it, and appropriately so. But we knew we were the perfect ones for the job! At Boardwalk, quality craftsmanship is our middle name, and we take pride in doing the job right …the first time around! We couldn’t wait to turn this “Bathroom from Hell” into a heavenly paradise for Robert & Julie! 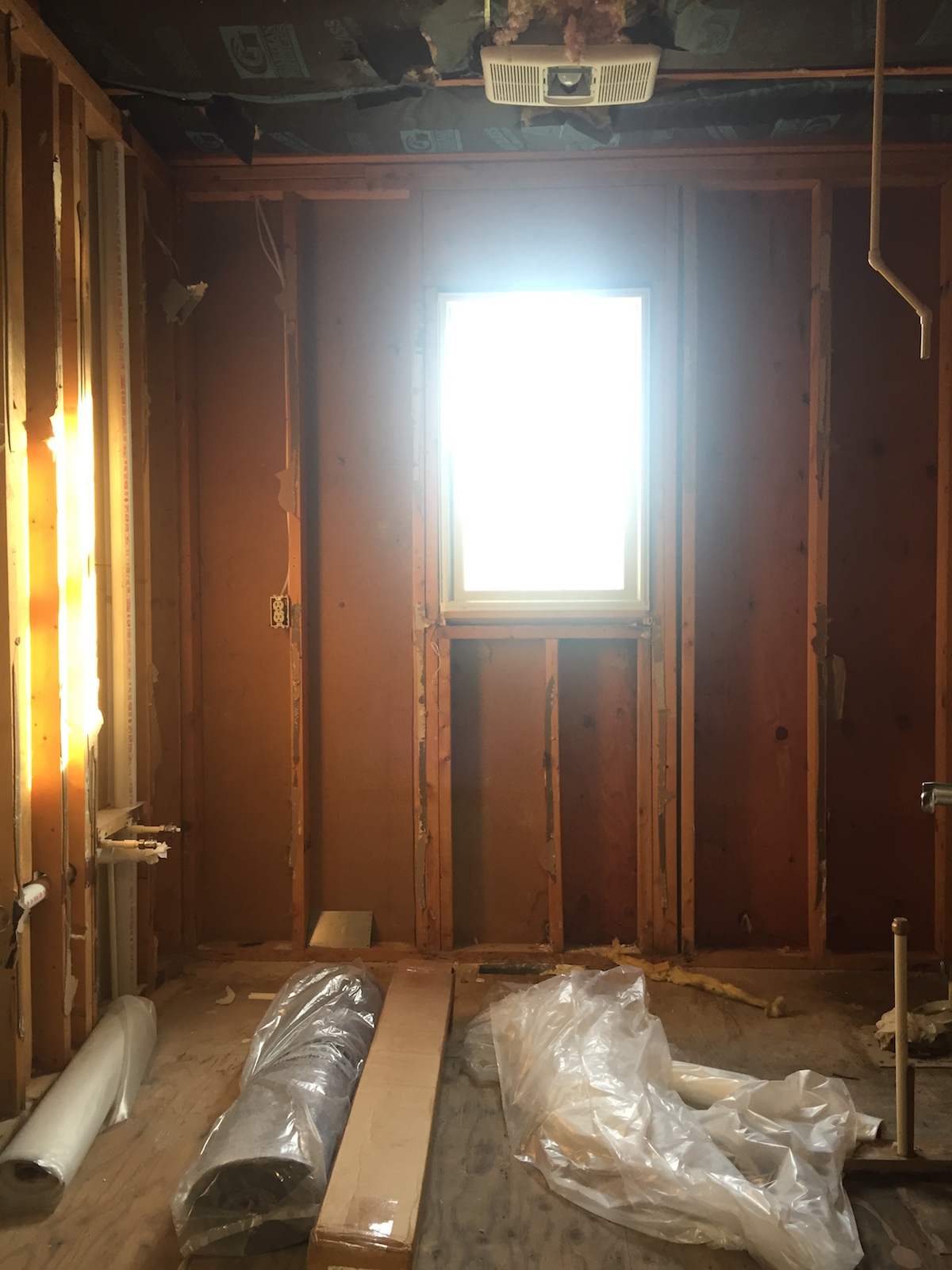 Since the bathroom was already completely gutted, we had a blank slate to work with. Because this was their third remodel, it was important to be budget conscious, but not cut any corners. We decided to keep the layout the same and reuse as many of the existing fixtures as possible to cut costs. Structurally, the only thing that was changed in the bathroom was we removed a skylight, and made some adjustments to the shower framing. We also updated the shower plumbing to install 4 body sprays and a hand shower. To ensure that Robert and Julie would not have to worry about another leaky shower, we installed a waterproof EPDM membrane on the shower floors and brush-on waterproofing at shower walls. A cement board with brush-applied waterproof membrane was also installed under the bathroom floor tile. 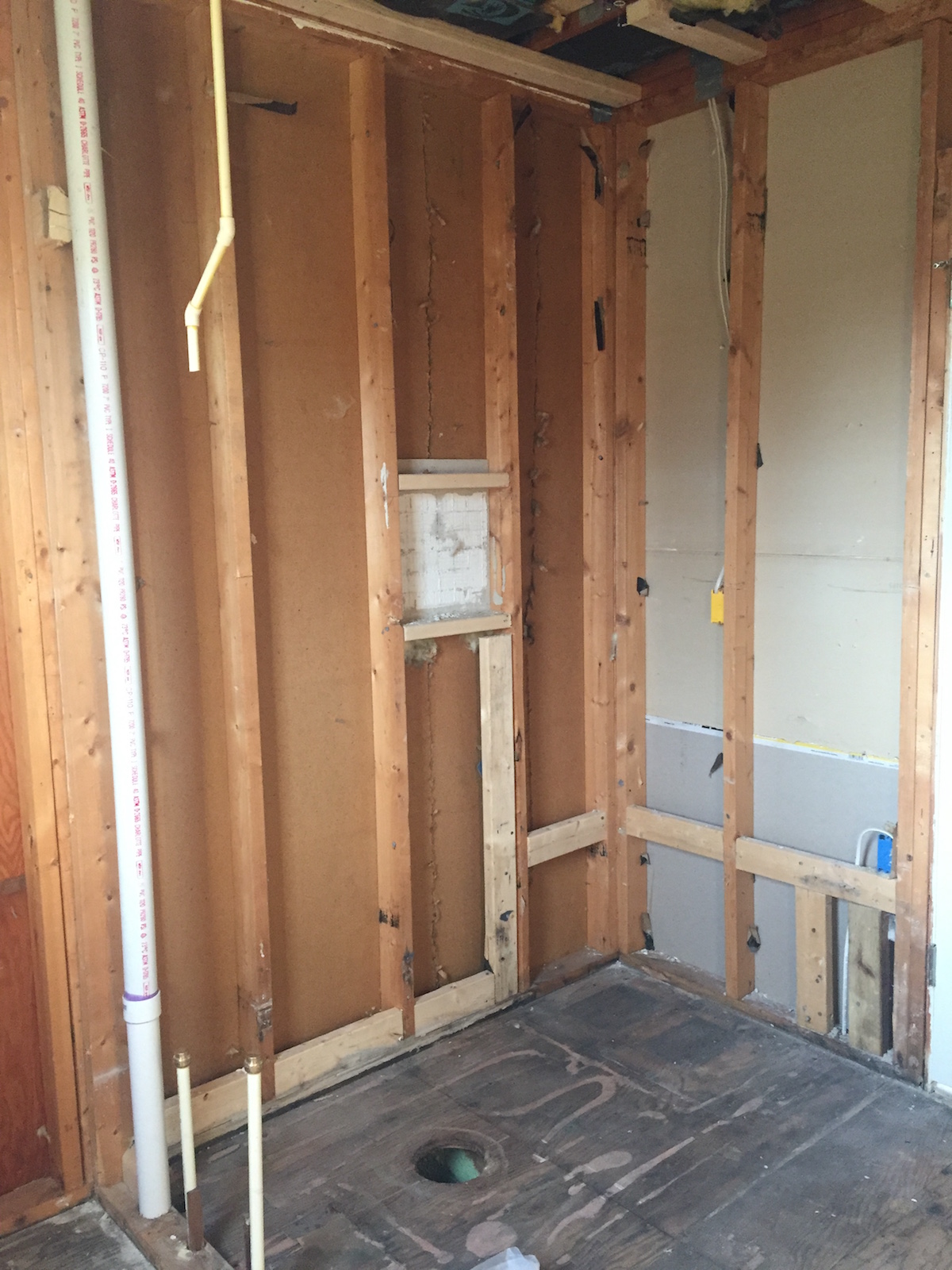 Next, it was time to make this bathroom look and feel like a suite! We updated the existing vanity with a new quartz countertop, and installed carrera marble on the floor, as well as on the shower floor. 5x7 white tile line the shower walls, while white carrera in a basket weave pattern accent the shower niche. The vanity mirror and lighting were reinstalled in their original locations. Gray walls and white trim make this space look and feel fresh and modern. 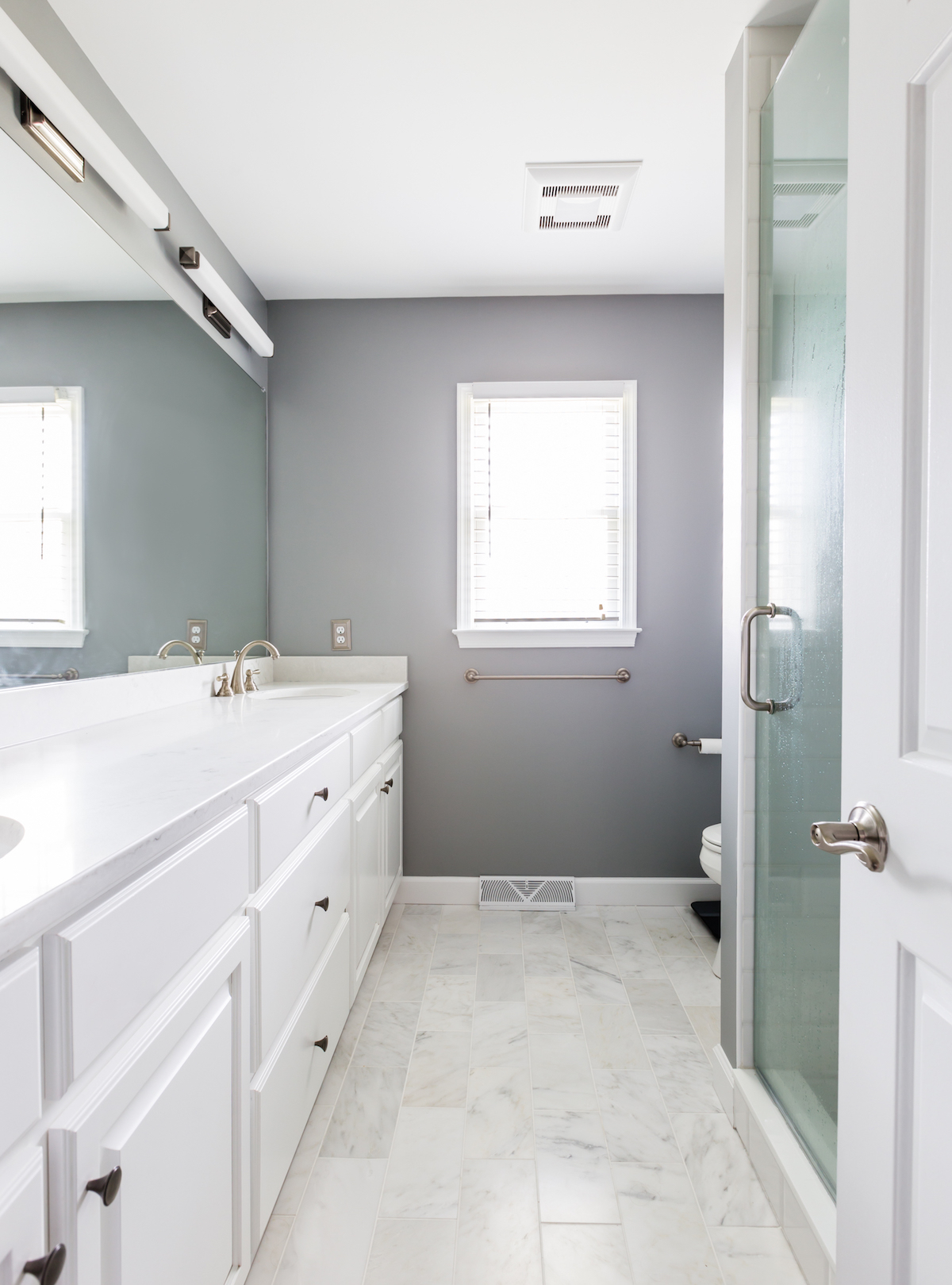 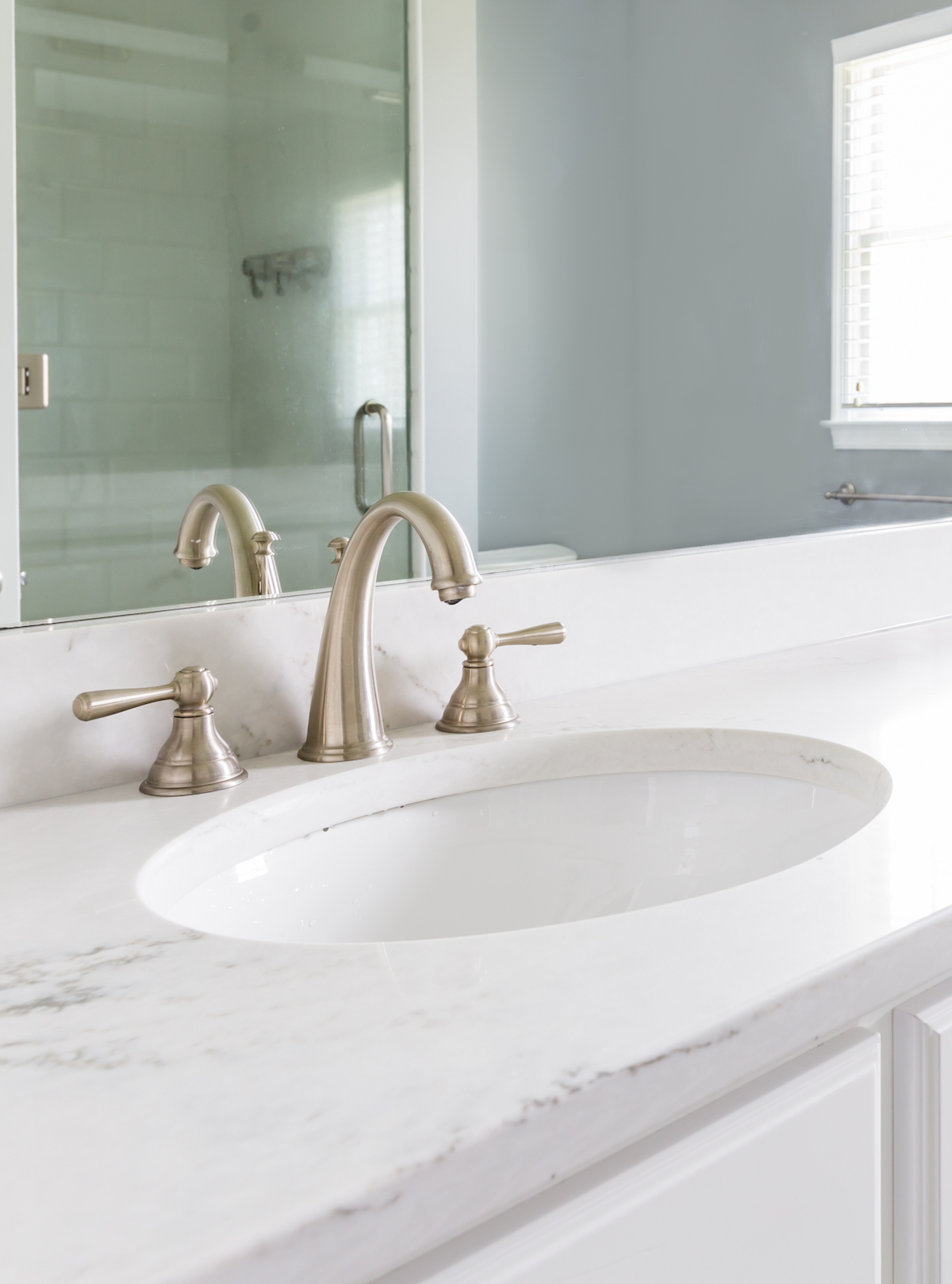 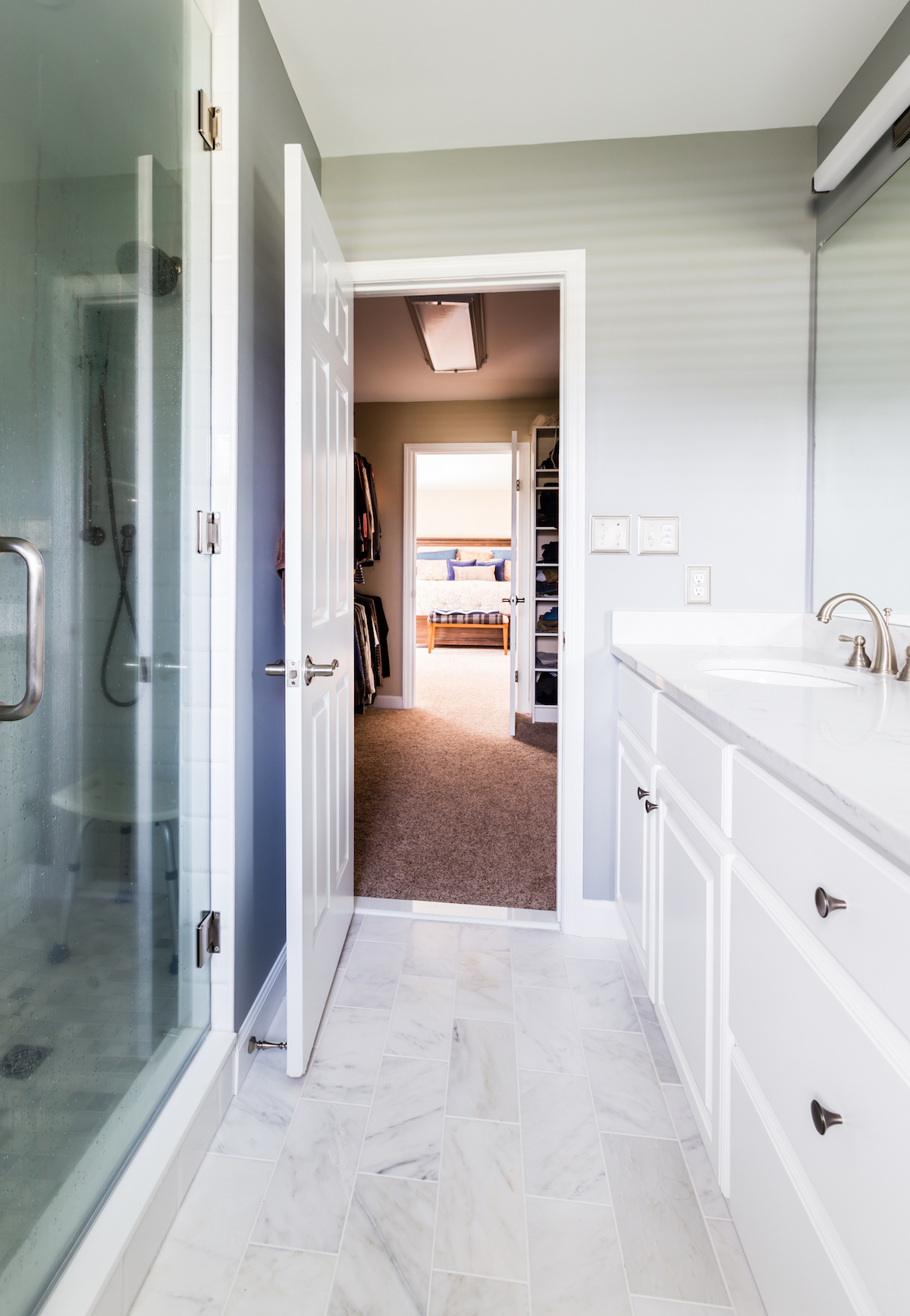 We think this (ex)Bathroom from Hell has definitely earned its angel wings. And Robert and Julie are happy to report that they have been thoroughly enjoying their heavenly oasis… without any leaks.

The moral of the story: If you want your remodel done right the first time, call Boardwalk Builders :-)